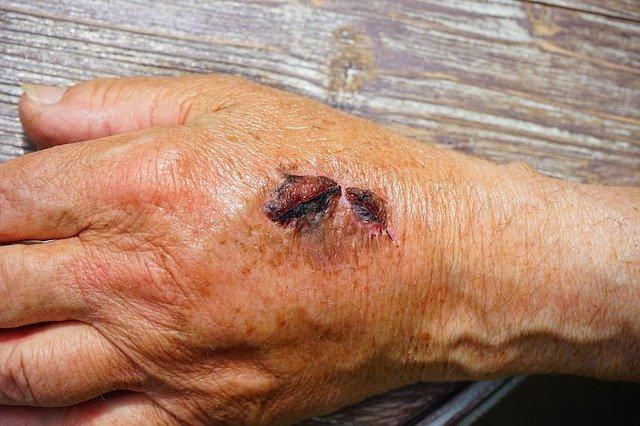 EXPOSED INJURIES
These are those injuries in which there’s a disruption in the continuity of the skin.

These injuries are common in athletics and include open wounds and various skin liaisons that may or may not break the skin.

Open wounds are normally caused by physical trauma and may range from a simple scratch to a large, deep, freely bleeding laceration.

It is important to note that an open wound may only be surface evidence of a more severe and often hidden injury.

Most open or exposed injuries are minor in severity and do not result in significant hemorrhaging or loss of tissue.

However, any bleeding must be controlled before a complete evaluation if the wound itself or of the possible involvement of deeper anatomic structures.

Abrasion occurs when the epidermis and a portion of the dermis are scraped or rubbed away.

This type of injury is very common in athletic activities and it’s usually caused by falling on rough surfaces.

Athletes in their own parlance commonly referred to abrasion as turf burns, mat burn, or floor burns depending on the surface that caused them.

A reddish, a regular surface appearance gives rise to the descriptive strawberry or “monkey yansh”.

The bleeding associated with abrasion is usually limited to blood oozing from underline injured capillaries.

Although the injury may be painful, the primary concern is that of the infection.

The abraded area will often contain contaminants such as debris or bacteria embedded in the injured tissue.

An Abrasion must be cleaned thoroughly. Soap and water will work well but the surface should be cleaned with antibacterial straw. All foreign materials should be removed.

Depending on the circumstance of the injury, we may have to use a soft brush to clean the area injured.

An abrasion should be referred to a physician if you’re finding it difficult to remove all the foreign materials by washing the wound or if the area surrounding the abrasion becomes inflated and infected a few days after the injury.

This is a type of wound that occurs by tearing. This injury is usually a result of some type of direct blow to the skin and is especially common over prominences. The skin may be stretched and actually torn apart.

Lacerations are often described as a combination of contusion and tear. They generally lack the clean appearance of a typical incision.

The edges of a laceration are usually jagged or irregular or at least some surrounding tissue damage occurs in most laceration injuries.

The severity of laceration can range from a very small crack in the skin to a large, deep wound to surrounding and deeper structure.

The nature and severity of bleeding associated with laceration are quite variable.

You should also use gauze with iodine to pad the surface of the wound and rap with bondage before referring to a physician if the need be.

An incision is often caused by cutting with sharp objects such as a sharp knife, razor blade, etc.

The edges of incisions are smooth and plainly cut with little or no damage to the surrounding tissues.

Occasionally, an incised wound will be deep and there would be damage to the tissues, nerves, muscles as well below the surface of the skin.

Treatment
The most important thing is to apply pressure to stop the bleeding.

If the bleeding is not much, all the treatment under laceration is also applicable to the incision. If otherwise, refer the victim to a physician.

Puncture wound occurs as a result of direct penetration of the skin by pointed objects e.g, Nail, Needle, Pin. The opening of the wound may be quite small with little or no bleeding.

The penetrating object may however damage underline structures and carry contaminants to the body.

One of the first considerations in caring for puncture is to determine the depth of the penetration and the possibility of underlined damage.

Only if the puncture is very minor and the penetrating object is very small with little depth of penetration.

It is the first aider that would justify by simply cleaning the wound and observing for signs of infections.

The majority of puncture wounds should be cleaned and promptly referred to a physician and large items that remain embedded should be left in place until a physician can remove them.

It is the tearing away of a part of a structure when referring to an open wound.

An avulsion is tearing loose of a piece of skin that may be turned completely free or remain partially attached hanging as a flay.

There may or may not be much bleeding. If an avulsed piece of skin or tissue of a significant side is torn completely free from the person, it should be saved and transported with the person to the hospital/medical facility.

The avulsed portion should be wrapped in sterilized gauze and kept moist and cool.

Occasionally, a significant portion of avulsed tissue may be successfully reattached.

When the avulsed part remains attached, the flap of skin should be placed back in its normal position before bandaging and referring to the appropriate quarters.

Small flaps of skin especially in highly vascular body tissues such as the scalp and the face may remain viable and heal if replaced.